A little about painter Joe Boudreau

The work of Artists Joe Boudreau and Michelle
Peterson-Albandoz will be featured at Las
Manos Gallery during October- Chicago
Artists Month. The reception is Friday,
October 2, from 7-11pm.
Posted by Las Manos Gallery at 12:25 AM No comments: Links to this post

Featuring eight gifted straight photographers and photo-artists practicing in a variety of genres and techniques and experimenting with them intensely, this “spectrum show”’s most powerfully emotive work is Benjamin Wilson’s series of “Interior Spaces,” in which ordinary empty rooms are transformed into surreal sites that smack of ominous antiseptic modernist labyrinthine torture chambers, through the quiet offices of a simple pinhole camera fashioned from a paint can. A second dose of the twilight zone is provided by Mieke Zuiderweg’s small hazy color shots–taken with a primitive plastic Holga camera–of details of the figurative commercial statuary adorning the roofs of stores; shot from below, these icons of kitsch take overpowering command over us poor mortal consumers. For the opposite effect of the finest intricate precision in endlessly involved and layered black-and-white abstractions of tomato cages, fencing and sheeting, look at what Paul Clark does with a plastic Isolyi camera, which he calls “a higher-line Holga.” All power to the primitive. (Michael Weinstein) 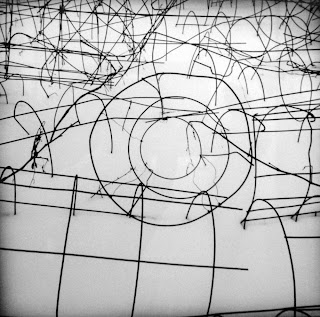 Paul Clark from the Garden Series 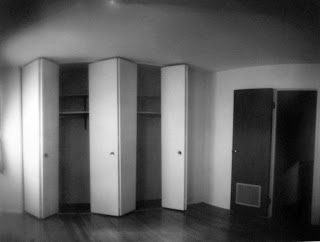 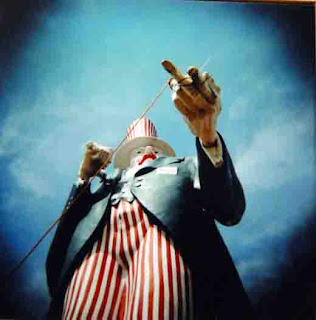 Mieke Zuiderweg from the Holga Series #1
Posted by Las Manos Gallery at 4:26 PM No comments: Links to this post 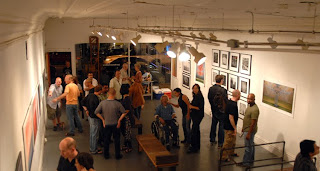 The reception at the New Photographs Show
at Las Manos on Friday night, September 11.
Posted by Las Manos Gallery at 4:08 PM No comments: Links to this post

Posted by Las Manos Gallery at 5:47 PM No comments: Links to this post