Kevin Hanna, the Director, Writer and Producer
of the short film "Good Intentions" shot part of
his project at Las Manos Gallery over the
weekend. The film, which will run between
four and seven minutes, will be submitted to
the 48 Hour Film Project to compete with
other entries from six continents. Their
deadline is this Sunday, and we wish
them well! 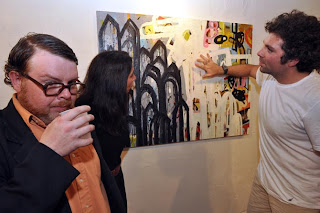 The actors run through a scene of the film.
The main character, left, bumbles through his
life not knowing what's happening to him,
even though it does happen. 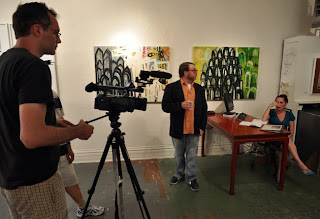 Kevin Hanna, left, checks the lighting situation
at the Gallery on Saturday as the actors take
a break from the stifling heat. 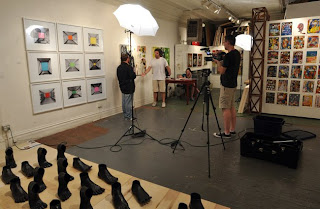 The Gallery was used for a few scenes in the
short film.
Photos by Mieke Zuiderweg
Posted by Las Manos Gallery at 12:40 PM