Some say that the presence of zombies flare up
in our society when people are particularly
anxious over tough times and the possible end
of the world. With a recession and Nostradamus'
predictions of our demise in 2012, the climate
is ripe for some zombie art!

The artists in the StatiCCreep Exhibiton of
Sequential Art are no exception! Lucy Knisely,
Hilary Barta, Jeffrey Brown and Jill Thompson
are feeling the undead in their pens...


Lucy Knisely
"Zombies at the Riviera" 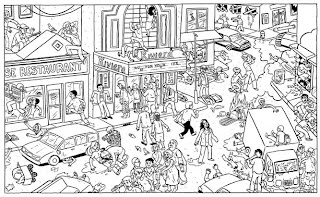 Knisely's zombie invasion hits particularly
close to home. The Riviera Theater on Lawrence
and Broadway in Uptown, Chicago, is the
comical but gruesome scene of the living and
their sudden struggle to stay undevoured!
Knisley's delicate and light drawing style clashes
strongly with images of the undead taking
slow delight in eating Uptown residents.
We at Las Manos have trouble passing this
intersection without our mind's eye filling
in the staggering carnage. Nice job Lucy! 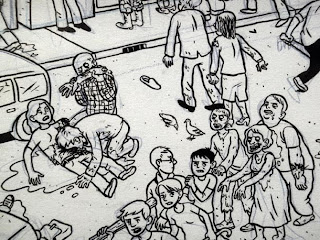 A detail of "Zombies at the Riviera" 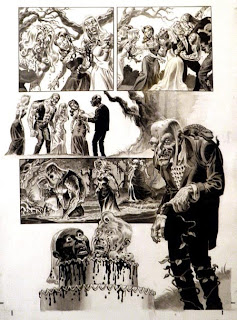 Barta's zombie stories are a blend of old-school
horror and classic blonde femme-fatal meets
untimely demise. Set in the south, moss and
dead trees add to the aura of dread. These wordless
panels convey the message of terror simply by the
shading and silent screams. What woman can't
relate to this zombie nightmare? Lost in the woods,
confronted not only by a brutal death, but then to be
zombified and live in polygamy in mud and ooze?
Barta's zombie narrative scares the living daylights
out of any independent woman! 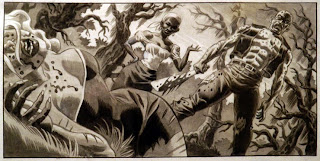 A detail of "Zombie Wedding at Slaughter Swamp" 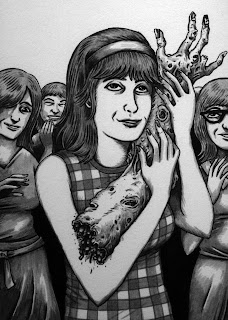 We are delighted to have Jeffrey Brown's
work at Las Manos Gallery this month.
Along with the StatiCCreep show, Brown
has work in Chicago's Museum of
Contemporary Art as part of the "New
Chicago Comics" exhibition.


Jeffrey Brown takes us to the sweeter side
of zombie love. "Zombie Sex Slave" shows
the tender side of affection for the undead.
The love of a rotting arm is treated as an
object of worship. Not unlike that of the
obsession of long-dead musicians by living
folks today... 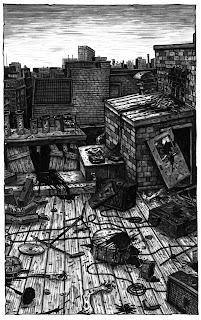 It's clear from Brown's "Abbey Road
Aftermath" - the Beatles' 1969 London
roof top concert ending in zombie slaughter -
that he takes a particular satisfaction in
penciling zombies in the music industry.
"Paul is dead" the 1969 rumor that Paul
McCarthy had perished, plays a jumping-off
point for Brown, launching zombie Paul,
passionate about taking other musicians,
and Yoko Ono, to the other side...

A detail from Jill Thompson's
"Beasts of Burden" 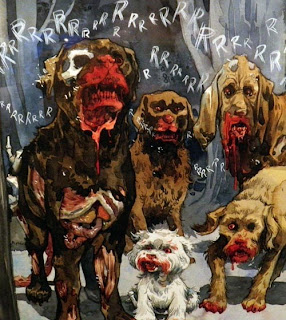 Jill Thompson jumps right out of the
zombie box by skipping human corpses
and going straight to undead dogs. Her
super-saturated watercolor style adds
a grisly punch to the decomposing
animals. If human zombies stagger slowly
through the streets, are dog zombies able
to chase you? Either way, her illustrations
are incredible and give us chills...