A Call to Action: “Environ” at Las Manos Gallery

Michelle Peterson-Albandoz is a curator who likes to make you think…on many levels. Las Manos Gallery’s latest group show “Environ” is no exception: Fourteen artists contribute their vision of man’s damage to land in the pursuit progress and consumption, now through September at this Andersonville space.

The environmental activist theme is a constant with Peterson-Albandoz, also an artist known for her reclaimed/recycled wood compositions. “There’s so much consumption and waste out there—it just makes sense as an artist to recycle materials into something responsible and beautiful,” says Albandoz. 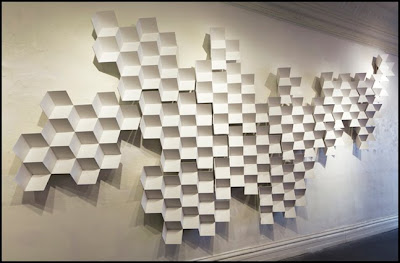 Peterson-Albandoz & Wright's "The Migration of X, Y, Z"
Her own contribution to this show is a departure from her previous, more urban/rustic assemblages of reclaimed and repurposed material. “The Migration of X, Y, Z,” a collaboration with master craftsman Phil Wright, evokes a flock of white birds: cubist and three-dimensional. Larger in scale than her previous installations, the work’s stark geometric form and lack of color make an arresting statement that also soothes via repetition and shadow play. 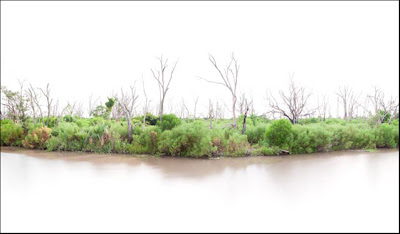 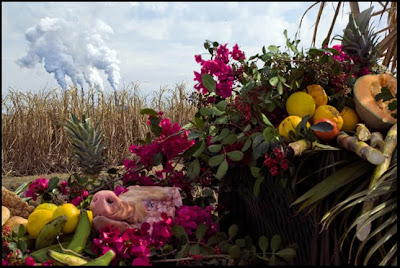 Linda Adele Goodine's "Cane, from the Beeline Highway Series, Florida"
Overall highlights of this show are in its particular moments of irony: humorous and sad, captured by many of the contributing artists. Technicolor abundance and enticing detail practically yell to the viewer in Linda Adele Goodine’s giant still life photographs. Upon closer inspection they become deliberately grotesque and distinctly unappetizing as a whole: smoke stacks belching behind the banquet in “Cane, From the Beeline Highway Series.” Even her use of heavy traditional wood and bronze frames recall Dutch Masters’ still lives with a wink. In another work “Tenderfoot, From the Beeline Highway Series,” she poses a uniformed boy scout stiffly in front of a dead tree; boomerang in one hand, tame cardinal perched on the other; a joke on man’s foolish attempt to control the forces of Mother Earth? 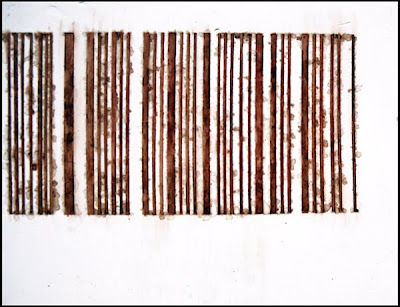 Derek Ottens " Jewel- June 14-1"
And if you find the life-size hog head in “Cane” tickling your sense of macabre, brace yourself for Derek Otten’s “Chicken Blood on Panels.” From afar, they could pass for small-scale overhead views of a keyboard. Look again: they’re bar codes from the super market packaging of chicken, replicated exactly with chicken’s blood. Otten asked a hallal butcher to provide him with the blood. “I’m a vegetarian,” he explained. “How we manufacture food in this country is appalling and I wanted to reflect the commerciality of that process.”

Michael McGuire's "Flag Dumpster"
Photographer Michael McGuire, a perennial exhibitor with Las Manos, has branched out into painting and drawing as of late, but he returns to his horizontal photograph format for this show with three decidedly different contributions. One an inviting water scene that makes you want to take a dip, another a high-contrast black and white depiction of wild flowers and the third, “Flag Dumpster,” encapsulates the message of this show with a photograph; the American flag painted on a dumpster. Doubtful the flag’s painter knew the visual pun he was providing…and portending. Well… there goes our bond rating. McGuire at his intelligent, witty best.

Olivia Petrides, (from left to right), Scott Johnson and Eric Bos
The painters in this show, Olivia Petrides, Eric Bos and Scott Johnson balance the whole nicely. Johnson’s road work scenes are interesting twists: he makes colorful cement mixers look like toy trucks as they circle in “State Fair,” and a group of clone-like construction workers, stick figures massed together on a job site, become human anemones in “Urban Development.” 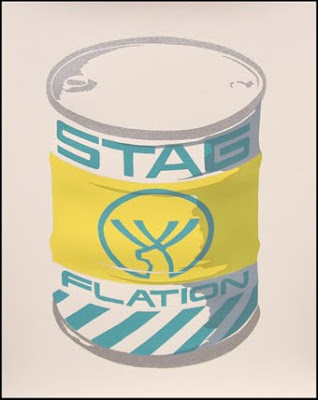 Tate Foley's "Stag Flation"
More graphic in design are Tate Foley’s screen print series of generic large cans (oil cans, judging by the Shell logo on one). Each is advertorially adorned with a slogan of Americana, and finally one bold can simply stating “Hell.” John McCaughey’s collages of found papers could be showcased with less obvious framing, but this young artist has a clear grasp of the conceptual. 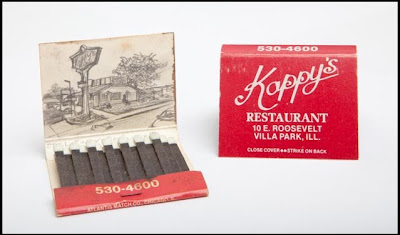 Krista Charles' "Kappy's Restaurant"
What is disposable and what we discard, large and small, is captured in Krista Charles’ tiny detailed drawings on matchbook covers. They depict the establishments and structures that used to occupy where the match book actually came from. More than one viewer noted the sharpness of her eyes and pencil to capture such detail so minutely. The haunting captions reveal the current status of these places: “Now boarded up for sale,” “Now vacant building,” and amusingly, “Still Kappy’s Restaurant.” If the medium is the message, all structures are easily erased or wasted, temporary man-made follies. 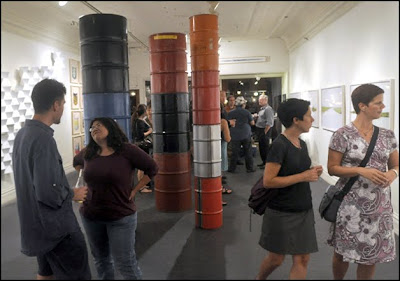 The opening night of "Environ"
“Environ” is a collective visual call to action for the planet. “Politics in art is a tough problem,” explains photographer Manning. “How to reconcile the beauty of a piece with a political statement doesn’t always work.” “Environ” accomplishes both. It is a thoughtful and thought-provoking show that does not sacrifice visual pleasure; a balance Las Manos excels at.

Susan Thomas is a freelance writer from Wilmette.