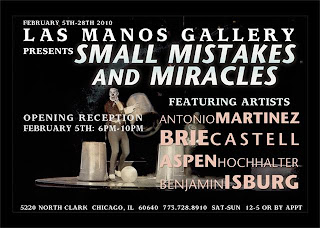 New to the Gallery- Mark Ottens 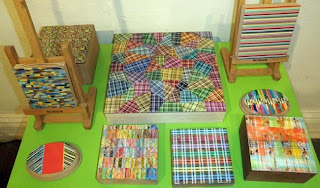 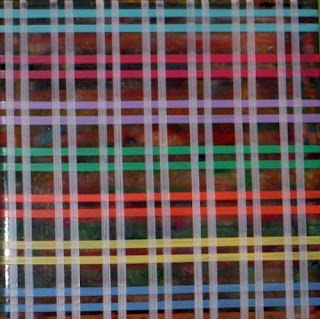 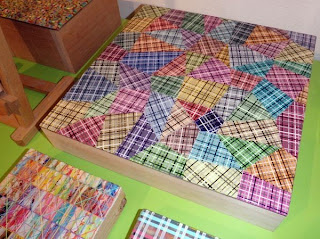 Audio Slide Show by Mieke Zuiderweg
Posted by Las Manos Gallery at 11:20 AM No comments:

Saturday, January 9th at 7 pm
Uncalled-For Readings Chicago is a mostly queer, mostly prose
reading series hosted by Megan Milks and Tim Jones Yelvington.
Featuring writers MECCA JAMILAH SULLIVAN, MEGAN MILKS
and M. SHELLY CONNER
MECCA JAMILAH SULLIVAN is from Harlem, New York. Her fiction has appeared and is forthcoming in a number of journals and anthologies, including Crab Orchard Review, Best New Writing, Bloom, Philadelphia Stories, Lumina, Baby Remember My Name, X-24: Unclassified,Woman's Work, Homeboy Review, and Baobab South African Journal of New Writing, as well as literary publications from Columbia, Yale, Temple, and Howard Universities. She was awarded the Smith-Shonubi Scholarship in fiction. She holds a B.A. in Afro-American Studies from Smith College and an M.A. in English and Creative Writing from Temple University. She is currently pursuing a Ph.D. in English Literature at the University of Pennsylvania, where her dissertation focuses on the relationships between genre, form, and identity in contemporary black women's writing. Mecca is also working on her first novel, tentatively titled She Woke Up With the Words in Her Mouth.
MEGAN MILKS is a Ph.D. candidate at the University of Illinois at Chicago. Her fiction has been published or is forthcoming in the anthologiesFist of the Spider Woman: Tales of Fear and Queer Desire; Wreckage of Reason: XXperimental Writing by Contemporary Women Writers;The &NOW Awards: The Best Innovative Writing; and 30 Under 30. Stories are published or about to be in DIAGRAM, Sidebrow, Mad Hatters Review, Pocket Myths: The Odyssey, Wigleaf, and The Wild. Her short story "Kill Marguerite" was published in May by Another NewCalligraphy. She co-edits Mildred Pierce Magazine.
M. SHELLY CONNER is a Ph.D. candidate at the University of Illinois at Chicago. Her comedy sketches have been produced by Second City Chicago and the 2007 Black Playwrights Festival hosted by the Black Ensemble Theater. Her article, "First Wave Feminist Struggles in Contemporary Black Motorcycle Clubs" was published in the Fall 2009 issue of the International Journal of Motorcycle Studies (IJMS). She is currently working on a novel that explores issues of race, class, gender, and sexuality in three generations of an African American family.
Posted by Las Manos Gallery at 5:02 PM 1 comment: 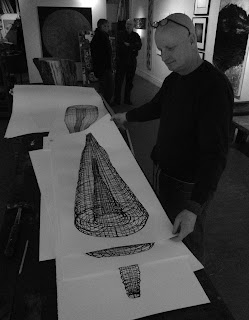 Chicago Artist Jeffrey Janson's pieces created
with oils on graphite paper will be on display
at the gallery through January. 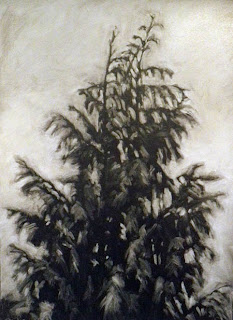 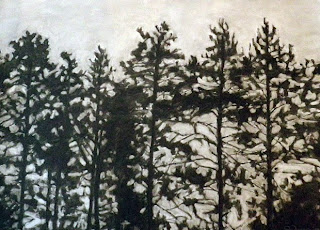 Posted by Las Manos Gallery at 1:18 PM No comments: 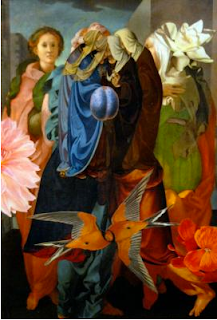 The stark contrast between photographic postmodernism and modernism could not be demonstrated better than in Doug Stapleton’s photo-collages—rife with exuberant cultural play—and Paul Clark’s straight abstractions of tomato cages and fencing that captivate with their complex and dynamic forms disturbed by disorder. Postmodern globalized mélange reaches its limits in Stapleton’s “The International Style,” which is a collage of statuary heads from various civilizations cut out from appropriated photos and arranged in a jumble that juxtaposes Jesus and a fakir, along with other improbable combinations. Turn to Clark and you will find an old-school photographic fundamentalist whose black-and-white images are exquisitely balanced in terms of the values of light, tone and composition; and result from a meditative and concentrated practice at the antipodes from Stapleton’s unbridled romp through history. Yet Clark’s stills are alive with the dance of rebellion against rational order, as the tomato cages twist in the snow and the fences buckle, warp and split. (Michael Weinstein)

Posted by Las Manos Gallery at 4:59 PM No comments: