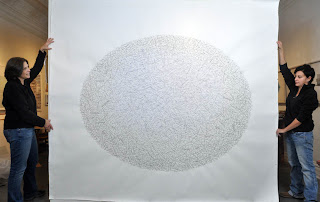 Artist Tricia Rumbolz, left, stopped by Las Manos Gallery recently to have her work photographed. Her piece "Excerpts from Personal Inquiries " consists of thousands of hand-written quotes on transparency paper, cut and pasted over each other. The piece, which is a work-in-progress, continues to grow in phrases and sentences after she reads or hears daily curiosities. 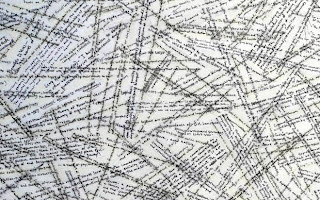 A detail of "Excerpts"

Posted by Las Manos Gallery at 2:20 PM No comments: 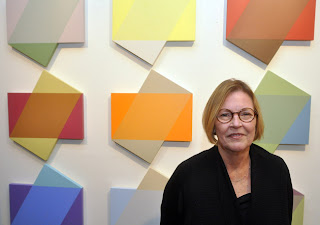 The Painting Center at 547 West 27th Street in New York, NY, has announced a benefit exhibition under the title: "Artists Invite Artists; Small Works Invitational."
Blinn Jacobs will join more than 100 artists in support of the Center.
Posted by Las Manos Gallery at 4:40 PM 1 comment:

A little insight into Geometrically Composed 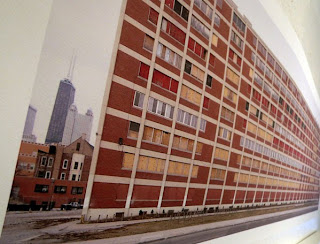 McGuire's eye picks out buildings that already
have a longer sense of repetition than most.
He elongates the illusion by doubling, sometimes
tripling the images in PhotoShop. The results are
endless lines punctuated by inconsistencies created
by windows, ledges, boards. The finished image
reads like notes on a page- a complicated song of
shapes and colors.
Robert Burnier 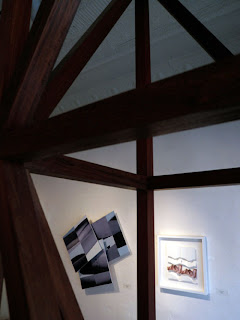 At first glance, Burnier's grid pieces
stun in terms of their meticulous geometric
intensity. Upon further inspection, you
move through his process and start to
see the images that appear in the
brushstrokes. Fragmented views of a
bomber airplane's engine, an extreme
close-up of smoke from an explosion-
all examples of destructive human
activity. The viewer is then left to
their own emotional response to the
subject... 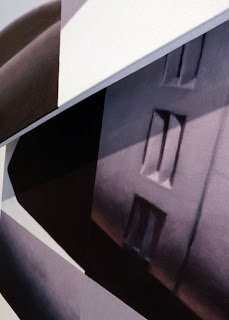 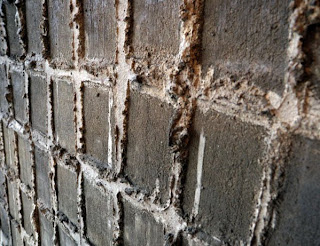 Peterson-Albandoz's body of work partially consists
of wood constructions created from disregarded
planks of Chicago's porches, fences and windowsills.
For the Geometrically Composed show she switched
gears and sculpted concrete. Adding an ebony stain
enhanced the ridges framing the stark squares. The
piece is organic and architectural in the same
moment that it's geometric.
Doug Reyes 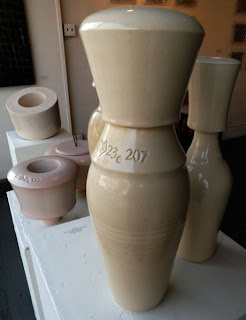 Reyes creates these incredible vessels on
the wheel. That in itself is not unremarkable,
what is is that they are one solid block of
clay. The pieces are slowly worked from
several angles. Reye's process and technique
make this body of work exquisite. 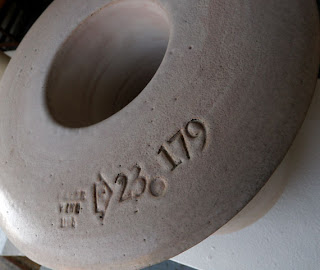 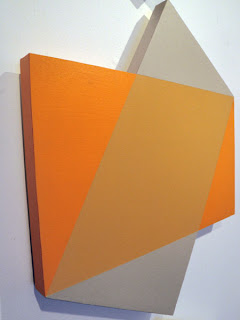 Jacobs' series of "counterpoise" paintings
consist of a light balance of canvas and
gatorboard in polygonal shapes. The
rectangles of color hang precariously
between opposing angles, giving the
viewer an impression of suspense.
The pieces play with stability, opacity
and a sense of fun. 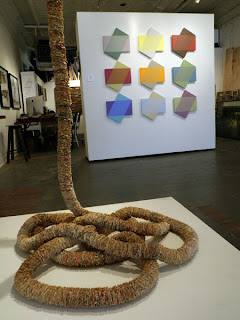 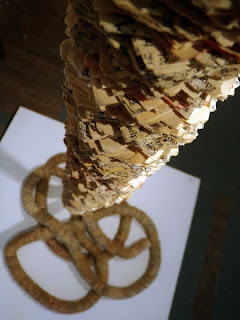 A detail of Zuehike's "Fantasy Rope,"
an amazing creation of cut pages
threaded together to create a
Rapunzel-like strand of confined
thoughts. Each square-cut page
is from an old harlequin novel. Read
into what you would like...
Mark DeBernardi 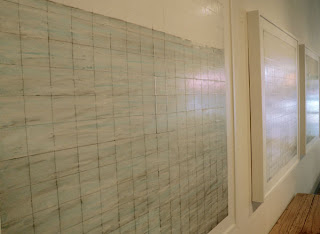 DeBernardi's work is an amalgamation of
photography, pastels and graphite. When
looking more deeply into the pieces you can
spot bits of plastic tucked masterfully though
out the compositions. Titles like "Warning"
and "Choppy Waters" tell the possible ending
to our clean water supplies through pollution
and neglect. 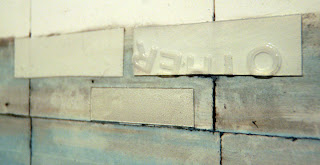 A detail of DeBernardi's "Choppy Waters"
Posted by Las Manos Gallery at 1:39 PM No comments:

Las Manos is now on Artlog.com! 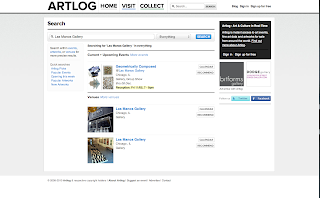 Las Manos Gallery is now listed on artlog.com.
Our exhibitions, events, openings and artists
will now be featured on the site. Check it out!
Posted by Las Manos Gallery at 1:00 PM No comments:

Griffin Theatre Company is
moving back to the
neighborhood!
Come celebrate with them
at Las Manos Gallery this
Saturday, November 13th,
from 7:30-11:30pm.
Order tickets online:
www.griffintheatre.com 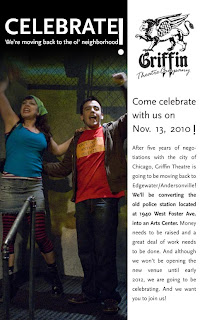 Posted by Las Manos Gallery at 10:38 AM No comments: 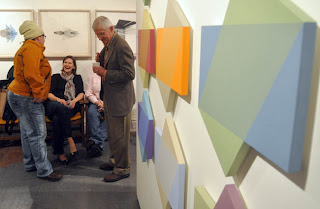 Work on canvas and gator board by Blinn
Jacobs. 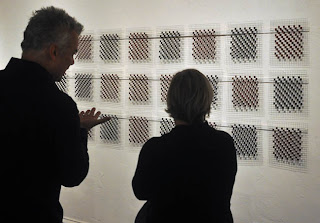 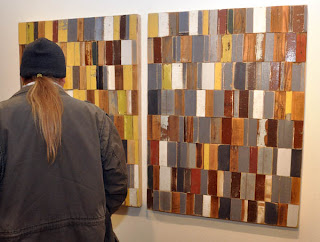 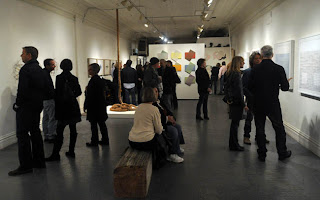 The show attracted a variety of people
interested in the aesthetics of lines and
having a good time... 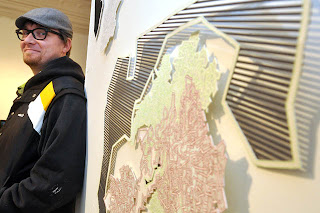 Artist Ben Rosecrans and one of his pieces
made of vellum and balsa wood... 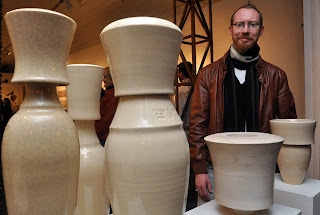 Artist Doug Reyes stands with a few of
his wheel-thrown vessels. 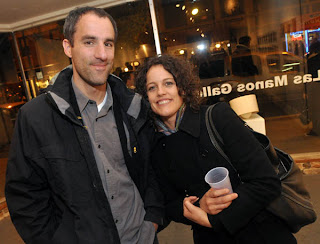 Artist Mark Pease and his wife Jessica enjoy
the opening. Pease was also part of the
ReModernist Show at the gallery in August. 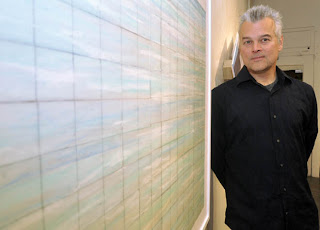 Artist Mark DeBernardi stands with one of his
mixed-media photographic pieces of Lake Michigan. 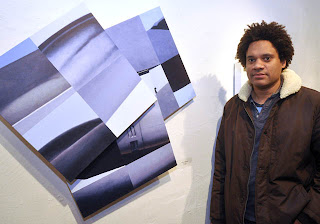 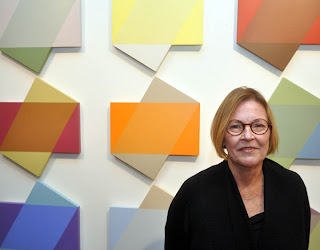 Artist Blinn Jacobs of Connecticut stands with
her "Counterpoise" series. Jacobs traveled
from Connecticut to be part of the show! 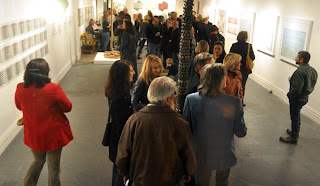 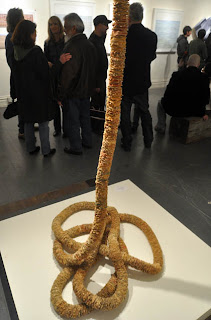 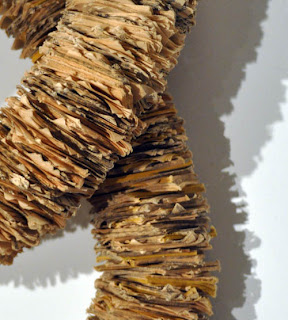 Zuehike's piece consists of thousands of
pages of old harlequin novels strung
together.
Posted by Las Manos Gallery at 11:30 AM 1 comment: 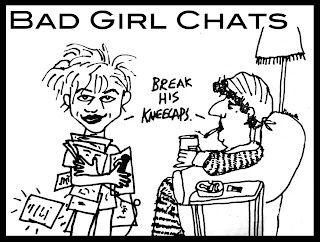 BadGirlChats.com!
Long-time friend of Las Manos Gallery, Nicole
Hollander, creator of Sylvia, has launched a new
site!
"Do you miss Sylvia? Yearn no longer! Visit
BadGirlChats.com four days a week and
stay connected. We're launching Monday,
November 1st, the day before the mid-term
elections. Uh-oh, get your smiles before it's
too late! " -Nicole
Contact Nicole at: info@badgirlchats.com
Posted by Las Manos Gallery at 10:49 AM No comments: